Have you ever wondered whether electric hand dryers in public restrooms are loud enough to hurt your hearing? A study by 13-year-old Nora Keegan, published in Paediatrics & Child Health in 2019, suggests that the sound levels of many models exceed 85 A-weighted decibels (dBA). (A-weighted decibels measure how loud we perceive a sound to be.) Sounds at or above 85 dBA can damage your hearing over time. Nora also found that since children are lower to the ground than adults, and therefore closer to the sound source, they may be exposed to even louder sounds from electric hand dryers.

It is important to protect children’s hearing since noise-induced hearing loss is permanent and can impact school performance. Nora lives in Canada, where it is illegal for children’s toys to be louder than 100 dBA. She wondered if other sounds in children’s lives, such as electric hand dryers, were louder than the legal safe-listening levels for toys.

Nora took several measurements from 44 different hand dryers located around Alberta, Canada. She measured the decibel level of each hand dryer at two distances from the wall and at several heights—at the dryer’s output height, Nora’s own height, and the average heights of a 3-year-old child, an adult female, and an adult male.

While many hand dryers were under 85 dBA, about a third of the models Nora tested averaged over 100 dBA. Sounds that are 100 dBA can damage your hearing in less than 15 minutes of exposure per day. One model of hand dryer even reached 121 dBA, which is as loud as an ambulance siren!

Some hand dryer companies specify the decibel levels of their products in the owner’s manual. According to Nora’s report, many dryers operated at much louder levels than their manufacturers claimed. Nora also noted that at least one manufacturer offers a sound reduction nozzle at no additional cost, but Nora did not see this nozzle being used in any location.

The next time you use an electric hand dryer, keep Nora’s study in mind! Even though this is only one study—and occasional loud sounds at the levels of these hand dryers are unlikely to damage your hearing—repeated or long exposures to loud sounds from devices like hand dryers could cause hearing loss. To protect your hearing, keep your distance from the source of loud sounds and limit the time you are exposed to these sounds.

Many factors influence how loud a sound seems. One easily measured factor is sound intensity, or volume, which is measured in decibels. A-weighted decibels, or “dBA,” are often used to describe sound level recommendations for healthy listening. 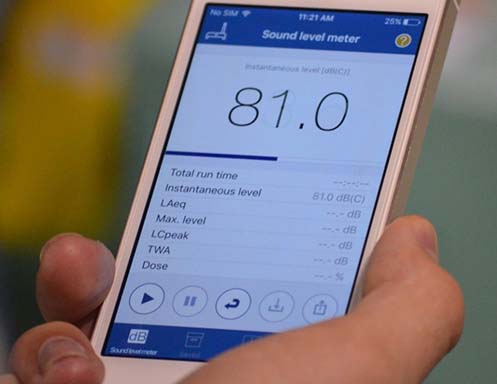 Do you work in a loud restaurant, a concert or sports venue, or at a construction site? Ever wonder if the noise could be damaging your hearing? There’s an app for that!

How Loud Is Too Loud? Find Out With This Infographic 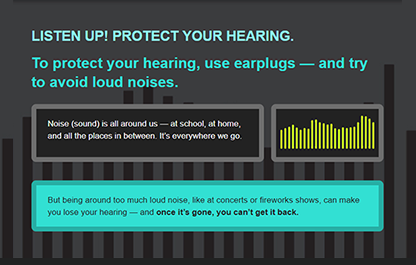 Noisy Planet is proud to host Listen Up! Protect Your Hearing, an interactive infographic that shows how loud some common sounds are.