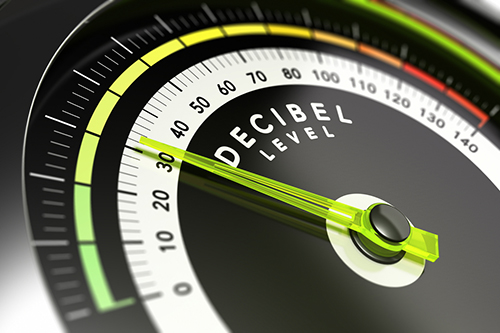 Has a noisy situation ever left you grimacing and clutching your ears? Why do some sounds seem so loud? Many factors influence how loud a sound seems, including how long it lasts, the sound’s frequencies (or pitches), and the environment in which you hear the sound. Another important and easily measured factor is sound intensity, or volume.

We measure sound intensity (also referred to as sound power or sound pressure) in units called decibels. Decibels (dB) are named in honor of Alexander Graham Bell, the inventor of both the telephone and the audiometer. An audiometer is a device that measures how well a person can hear certain sounds. A modern version of it is still used today to diagnose hearing loss.

Decibels are different from other familiar scales of measurement. While many standard measuring devices, such as rulers, are linear, the decibel scale is logarithmic. This kind of scale better represents how changes in sound intensity actually feel to our ears. To understand this, think of a building that is 80 feet tall. If we build up another 10 feet, the building will be 12.5 percent taller, which would seem just slightly taller to us; this is a linear measurement. Using the logarithmic decibel scale, if a sound is 80 decibels, and we add another 10 decibels, the sound will be ten times more intense, and will seem about twice as loud to our ears.

Sometimes we use different versions of decibels. A-weighted decibels, or “dBA,” are often used when describing sound level recommendations for healthy listening. While the dB scale is based only on sound intensity, the dBA scale is based on intensity and on how the human ear responds. Because of this, dBA gives us a better idea of when sound can damage your hearing.

The cochlea is a snail-shaped organ inside your inner ear that allows you to hear. The cochlea can respond to a certain range of frequencies, or pitches of sound. (Read more about how we hear or watch a video on how sound travels to the brain.) The cochlea responds best to frequencies in the range of human speech. It doesn’t respond as well to frequencies that are much higher or lower. When sounds contain frequencies are too high or too low for us to hear—as in ultrasonic and infrasonic sounds—our cochlea doesn’t respond at all.

In the frequencies that our ears respond to best, measurements for dBA are just as high as they are in dB. For instance, the high-pitched E string on a violin has very similar dB and dBA levels. However, a lower frequency sound that isn’t processed as effectively through the ear will have a lower output level. For instance, the lowest note on a tuba (16Hz) will have a much lower dBA reading than a dB reading. 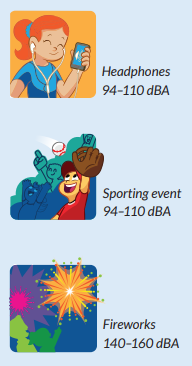 You can measure sounds in dBA yourself with a sound level meter, such as this app made by the National Institute for Occupational Safety and Health. The app can measure sounds from 0 dBA (sounds so quiet you can barely hear them) to whispering (30 dBA), normal conversation (60-70 dBA), and even a jet taking off (140 dBA). Just remember to turn down the volume, move away from the noise, or wear hearing protectors, especially when the sound level is at or about 85 dBA! 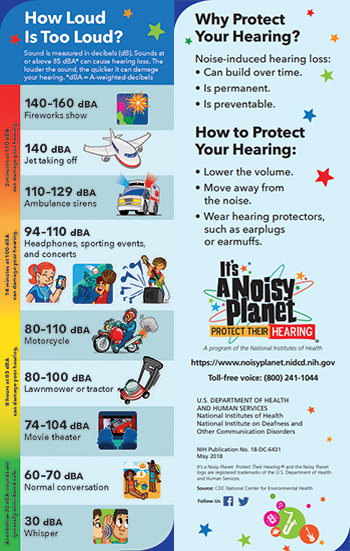 A bookmark that presents the decibel levels of various electronic devices, vehicles, machinery, and conversations, and discusses ways to protect your hearing.

Listen Up! Protect Your Hearing (infographic) 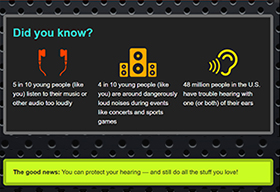 Noise is all around us. Find out how loud different sounds are, and learn to protect your hearing.